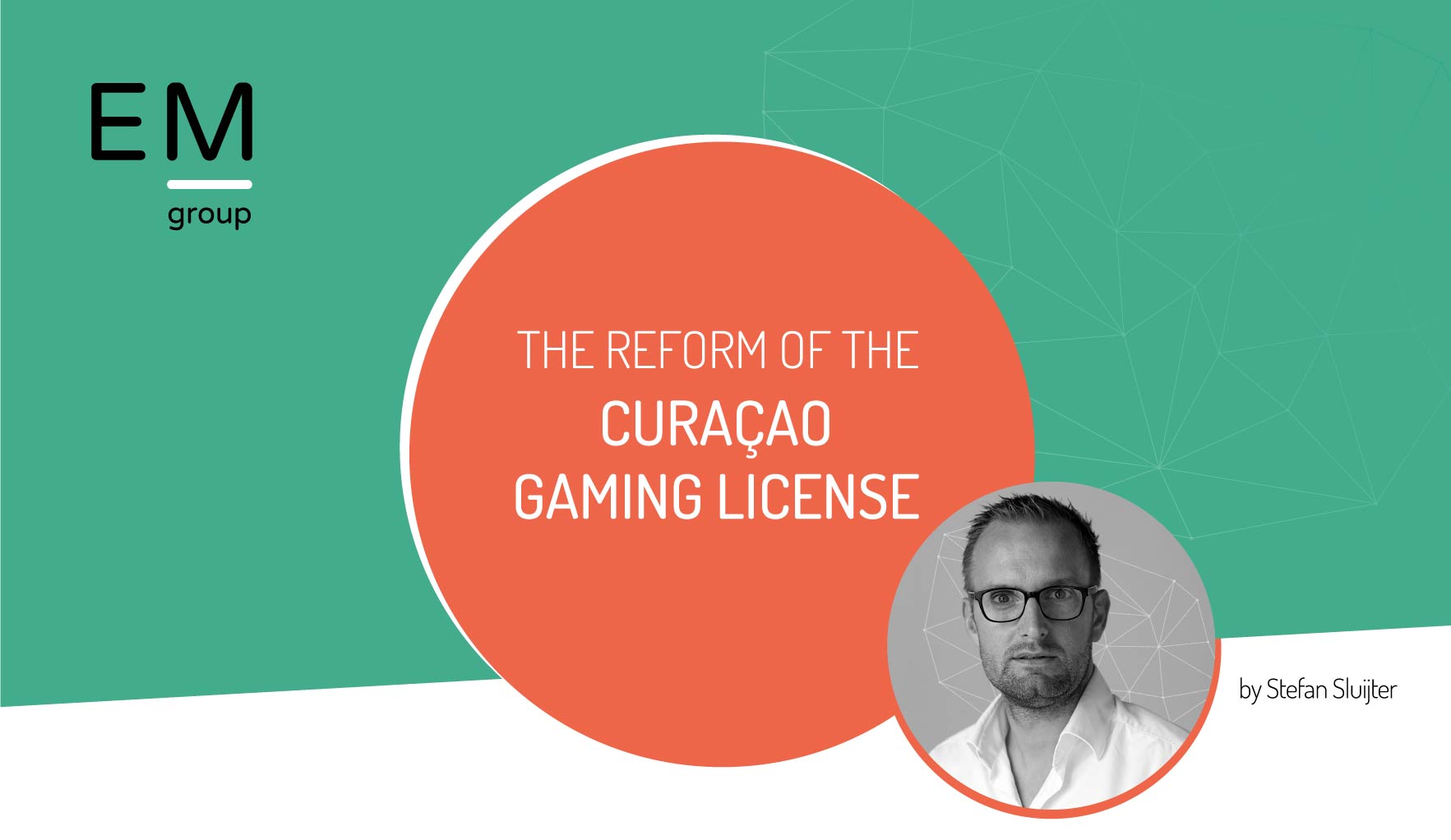 The reform of the Curaçao gaming license

What to expect from the Curaçao regulatory reform?

The changes in the licensing regime in Curaçao have been in the making for several years and are presently at the forefront of priorities for the Curaçao government. The current regime, which ables new operators to apply for sub-licenses with any of the four master license holders, is soon to be replaced by a central government-controlled authority; the Curaçao Gaming Authority (CGA). The CGA will not only have licensing authorizations but will also occupy the supervisory role within the sector and will be provided adequate enforcement powers. Currently, the CGA already exercises this role for land-based gaming in Curaçao.

Scope of the new licensing regime

Currently, operators desiring to obtain a license in Curaçao apply with one of the master license holders however once the new legislation comes into place, the new operators will apply directly with the CGA for a license.

The aim of this new legislation is firstly to strengthen the Curaçao license by imposing higher barriers to entry for the operators, hence aligning the Curaçao license closer to its counterpart licenses in EU jurisdictions. Another important goal is to centralize the process from the Curaçao government side, for the CGA to have full oversight of the licensees and address more effectively important concerns about illegal gambling and Anti Money Laundering (AML) matters. Furthermore, the new legislation will give better protection to participants in games of chance, as further conditions are set for operators. The result of this effort should, in the long term, lead to the Curaçao license being further recognized and valued by other jurisdictions.

What prompted this new legislation to be introduced?

The changes are due to several factors. For one, to reinforce international recognition of Curaçao as a reputable and supervised jurisdiction in the iGaming sector, while economically being beneficial for the country. As licensing fees are currently being paid to the master license holders, the centralization of control by the government will create new revenue for the island.

Another factor is the COVID-19 pandemic which played an indirect role as Curaçao’s tourism decreased drastically, leading the Dutch Caribbean Island to receive financial assistance from the Netherlands. In exchange, the Dutch government asked Curaçao to revise its online gaming laws for such to be closer to other supervised and regulated regimes.

What will this mean for existing licensed Curaçao entities?

As each master license holder has different conditions regarding their license, the new gaming license will ensure a more level playing field for all. The CGA can attach conditions, regulations and restrictions to a gaming license, in case these can reasonably contribute to the provision of safe, responsible, transparent and reliable games of chance. These can be on the level of the operator, such as prior approval towards changes in the legal structure or ownership but can also pertain to player protection related measures. Examples are the maximum amount for bets per person, as well as the manner of advertising. Furthermore, it gives the participants of these games of chance a better framework regarding the submitting and handling of complaints.

In comparison to the current situation, there will be additional controls on the operators whereby a focus on responsible gaming and AML measures will be implemented. Technical compliance will also be an important element when it comes to the measures that will be implemented. Furthermore, currently, it is being discussed which conditions need to be met when it comes to having an effective establishment in Curaçao. It is not clear yet if this indeed pertains to a minimum of three “key positions” employees, who will need to be hired locally, or if this will be implemented more gradually. Current operators under the sub-license regime will be given a specific term to provide their application to convert their license and adjust their operations to the new regulations. During that period, before the new license is granted, the new legislation will not immediately apply to operators with an existing license, if they have registered with the CGA before the new legislation came into force. The new license will have a maximum validity period of 5 years, after which it needs to be renewed.

Despite the above, software providers in this sector can also request a license, as currently is already best practice with the master license holders. Naturally, part of the conditions and measures in the new legislation will not apply to these software providers.

In addition, the yearly license fees will likely increase slightly, although remaining competitive compared to the license cost of other jurisdictions. The fee will consist of a regulatory fee and a gaming contribution fee, whereby the regulatory fee will be variable, based on the number of domains amongst others. The fees are however not yet confirmed as they are still under review, and the final figures will be communicated once the law is implemented.

There will likely be some operators which may not be willing to adhere to these new regulations which can be considered an improvement in safeguarding players amongst many other developments. On the other hand, committed Curaçao licensed operators will decide to remain and make the necessary investments. The latter group will ultimately benefit from a more reputable license that will give them access to a wider array of online payment methods and third-party service providers.

What about crypto gambling?

The new legislation currently does not include any mention of crypto gambling; and Curaçao’s Minister of Finance, Javier Fransisco Antonio Silvania confirmed that: “offering these services will not be possible with a Curaçao license for the time being”.

How large is the iGaming sector in Curaçao?

One of the current challenges with the limited scope of oversight from the Curaçao government is the fact that there is little data on the size of the iGaming sector in Curaçao. No concrete numbers are being reported and Minister Silvania, points out that: “one should be cautious when trying to estimate the sector’s size”.

In the same interview, he mentions: “We are hoping to increase the economic importance of the online gaming sector in Curaçao by introducing legislation and proper supervision.”

Targeting of markets for Curaçao operators

It is believed that no changes will be made from this perspective and no new rules will be imposed on operators on targeting certain markets; however, the responsibility will be placed on the operator to make informed decisions on such, similar to other EU-based dot.com licensing jurisdictions. As currently is the case, all countries which are part of the Kingdom of the Netherlands cannot be targeted and there cannot be any games of chance being offered to their residents. The Curaçao license can therefore be considered an outward license. Furthermore, the managing director of the operator may choose to take further measures regarding restricting certain target markets.

Next to the new gaming legislation, the legislation regarding AML conditions will also be adapted to be in line with the new gaming legislation. This is to ensure that operators will align their requirements and processes about the identification and verification of players upon registration. It is expected that new deposit thresholds from when KYC verification is triggered will be incorporated, which will be in line with other countries’ regulations on the matter. This will also include reporting requirements to the applicable authorities and player protection obligations.

The new legislation will not be a standalone legislation. To implement the measures from this legislation successfully, other legislation, such as the AML legislation, but also perhaps legislation regarding work permits for foreigners need to be amended. Furthermore, the CGA will need to draft and implement further guidelines on the different measures in the new legislation to give guidance to the sector on this. During information sessions with the sector, it has been mentioned that certain elements will be important for the operators to have, such as an operational handbook, containing information such as a description of all the games offered on the URLs of the operator.

When will the new legislation be implemented?

No exact date for this change of legislation has been put forward yet. Recent news articles have first quoted a date of release to be around March 2023; however, Minister Silvania, has recently announced there may be delays due to “several factors of which we [Curaçao’s government] have no influence”. At this point, the final bill has not yet been released but is said to be already drafted for online games of chance, and various stakeholders, amongst others corporate service providers such as EM Group, have been asked to provide their comments, thoughts, and input on the draft. Currently, these comments have been gathered and are being reviewed as part of the legislative process.

The Curaçao gaming industry stakeholders are all very much looking forward to the implementation of the new licensing regime. Although not all details are known yet, the anticipated resulting level playing field will not only safeguard players but will also make Curaçao a gaming jurisdiction with a solid backbone for the future.

How can EM Group assist?

With over 15 years of corporate service provider experience, we have established ourselves as online gaming industry leaders. We provide you with an effortless process and turnkey solutions and take care of your gaming license applications so that you can focus on what you do best, and we take care of the rest.

Whether you have an online casino, a sports betting, or a software company. We can provide you with incorporation, management and key-function services, applications for e-gambling licenses, compliance in the field of regulatory matters, responsible gaming, anti-money-laundering (AML), and fraud prevention.

Read the full article in the IMGL Magazine, November edition.

Tell me more about your gambling license services

EM Group offers compliance and corporate services for companies active in the online-gaming industry in Curaçao, Malta, the Netherlands and Cyprus